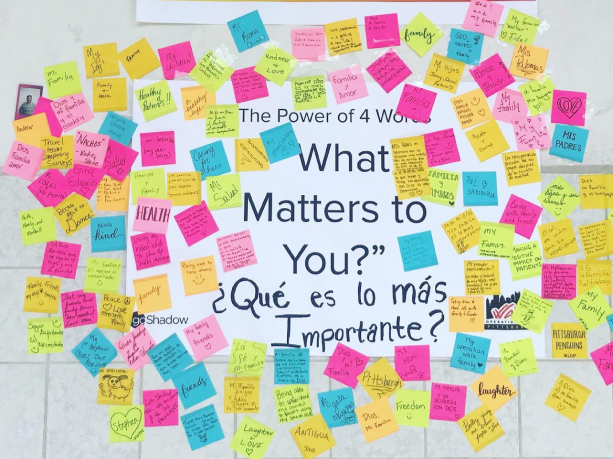 Bridging the Gap: How Four Words Brought Two Cultures Together

National borders and the unique cultures that flourish within those imaginary lines often cloud our ability to recognize all the similarities we as people share, regardless of our native origins. Our project to help bridge this gap was done by asking everyone, “What Matters to You?” Those four words acted as the catalyst of communication and connection for our patchwork Operation Walk Pittsburgh team as we worked together to changethe lives of patients, one hip and knee replacement at  a time.

After 10 years of medical mission trips, Operation Walk Pittsburgh has developed into a well-run, thoughtful organization with annual medical mission trips throughout Latin America. They have continued to drive excellence by partnering with goShadow in order to better understand their team members, the patients/families they serve, and the host country hospital teams they partner with.

This year, the Operation Walk Pittsburgh team was comprised of doctors, volunteers, and staff from medical facilities across the US. Most never having met before, these individuals came together to work with the medical team at Obras Sociales del Santo Hermano Pedro in Antigua Guatemala, where the two teams would be performing more than 50 total joint replacements in just four days.

In a central hospital hallway, adjacent to an open courtyard, we began our visual project. A simple poster on a blank wall in both English and Spanish asking, “What Matters to You?” along with a stack of post-it notes and sharpies available to use.  I set up the poster as curious bystanders (mostly Guatemalan patients and families) watched from the courtyard intrigued by what I was doing in the middle of the walkway. After encouraging a few Operation Walk Pittsburgh team members to help me kick off the project by taking a moment to think about what matters most in their lives and adding their notes to the wall, I approached my first Guatemalan families.  While I was nervous and apprehensive, it was the simplicity and ease of the question “what matters to you?” that made me calm. I understood then that the very reason I was nervous is precisely why I was doing the project, to break down walls and eliminate the barriers between us.

I am grateful for my Spanish speaking skills as I was able to convey our mission and why I was taking the time to ask everyone about their lives and motivations. The first families seemed apprehensive in the beginning, staring at the big wall with a few post-its in English, one woman explaining with defeat that she only knew Spanish and couldn’t participate. I encouraged her to write, making it clear that we welcomed any language and any answer, as long as it was authentic and truthful. You would sense an immediate shift in her attitude, as she began to write, becoming a collaborator in our project and an essential part of the work we were doing. She and other patients like her all began to add, one, two, three post-its to the board. Everyone had something to share. People like my new friend Fidel, who seemed to have at least six thoughts he needed to have on the wall, created a buzz and attracted others over to see what was going on.  The woman who was so apprehensive was now championing our project to anyone who would listen, encouraging them to participate.

I could feel the momentum build as more and more people stopped to see what was going on.  One of my favorite moments came at one of the busiest times when we had more than fifteen people writing and placing their post-its on the wall. One of our team members, Jess, a nurse from Pittsburgh, placed her note on the wall and then helped a Guatemalan nurse who was reaching to place her post-it higher where there was more space. As Jess pressed down the Guatemalan nurse’s message, right beside her own, I saw a smile come across both of their faces, they could see what mattered to them both the most was “My Family and Mi Familia.” They hugged and laughed sharing no words but communicating everything they needed to say to one another. Moments like this throughout the remaining days were too numerous to count as the wall continued to grow and replace the barriers with more and more bridges of connection.

This tangible representation made the rest of our project, using traditional paper surveys, so much easier as the “buy-in” to participate was perceived as a natural extension of the WMTY project and they could see and understand its value. We surveyed the staff from both teams, taking a deeper dive into their work lives, their thoughts about the trip and areas for praise and improvement. The results continued to affirm, just like the wall, that we are all so similar, from our motivations to our annoyances. The project allowed my team to make suggestions to Operation Walk Pittsburgh leadership team for trips in the future, but more meaningful was the level of trust and connection it provided us, a true testament to the power of asking a simple question. Adopted from IHI’s “What Matters to You?” framework: http://www.ihi.org/communities/blogs/why-asking-what-matters-to-you-should-be-an-always-event